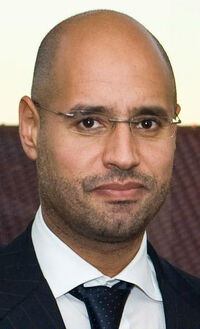 In 1994, Saif al-Islam graduated with a BSc in Engineering Science from Tripoli's Al Fateh University, gained an MBA from Vienna's IMADEC University in 2000 and PhD from London School of Economics in 2008, awarded for a thesis entitled "The Role of civil society in the democratisation of global governance institutions: from 'soft power' to collective decision-making?"[1] He is an architect with his own architectural agency in Tripoli – the National Engineering Service and Supplies Company.

Saif is the president of the Libyan National Association for Drugs and Narcotics Control (DNAG). In 1997, he founded the official charity, the Gaddafi International Foundation for Charity Associations, which has intervened in various hostage situations involving Islamic militants and the crisis of the HIV trial in Libya and the resulting European Union-Libyan rapprochement. Saif also performs public relations and diplomatic roles on behalf of his father. He has been mentioned as a possible successor, though he has denied this.[2]

Speaking in Sabha on August 20, 2008, Saif said that he would no longer involve himself in state affairs. He noted that he had previously "intervene[d] due to the absence of institutions", but said that he would no longer do so. He dismissed any potential suggestion that this decision was due to disagreement with his father, saying that they were on good terms. He also called for political reforms within the context of the Jamahiriya system and rejected the notion that he could succeed his father, saying that "this is not a farm to inherit".[3]

According to Landon Thomas of the New York Times, he has emerged as the Western-friendly face of Libya and symbol of its hopes for reform and openness.[4]

Giving evidence in a 2002 legal action against The Daily Telegraph, Saif al-Islam Muammar al-Gaddafi recounted an event that took place in his youth:[5] "One of the worst times in my family's life together was the United States bombing raid on Tripoli and Benghazi (the two biggest cities in Libya) in 1986. I was only 14 at the time and my family were all together in our home in Tripoli. One night, without any warning, the bombers came and, for five minutes, rained rockets down on us. I was woken up by loud crashing sounds and explosions, it was absolutely terrifying. Our house had been directly hit. I knew that we had to go to a shelter which had been built within the house. Sadly, some of my brothers and sisters were too young to know what to do, and they became trapped in one part of the house when a corridor collapsed. They were stuck there until the rescue services arrived, and, when we dug them out we found that Hannah, my youngest sister, had died. She was just four years old." Having lost the case, The Daily Telegraph was forced to apologise to Saif al-Islam for the two false allegations the newspaper had made against him: money laundering and enticing a journalist to travel to Libya to meet an uncertain fate.[6]

On December 10, 2004, shortly before a trip by Canadian Prime Minister Paul Martin to Tripoli, Saif requested in an interview with The Globe and Mail a formal apology from the Canadian government, for joining U.S.-led sanctions against Libya after the Lockerbie bombing, and for denying him a student visa to study in Canada in 1997. His request was met with incredulity in Canada, and the Canadian government announced that no apology would be forthcoming.

Saif introduced the Isratine proposal to permanently resolve the Israeli-Palestinian conflict through a secular, federalist, republican one-state solution.[7] The first ever opinion poll survey to be undertaken in both Pakistani and Indian-controlled Kashmir, conducted by King's College, London, and the polling organisation IPSOS-MORI, was also Saif's brainchild[8], having arisen out of discussions he had with British academic Robert Bradnock, the author of the 2010 Chatham House report on the survey.[9]

Interviewed by French newspaper Le Figaro on December 7, 2007, Saif said that the seven Libyans convicted for the Pan Am Flight 103 and the UTA Flight 772 bombings "are innocent". When asked if Libya would therefore seek reimbursement of the compensation paid to the families of the victims ($2.33 billion), Saif replied: "I don't know."[10]

Saif is involved in negotiating compensation from Libya's former colonial power, Italy, and on 30 August 2008 a Friendship, Partnership and Cooperation Agreement was signed in Benghazi by his father and Italy's prime minister Silvio Berlusconi.[11] He is also negotiating with the United States in order to conclude a comprehensive agreement making any further payments for American victims of terror attacks that have been blamed on Libya — such as the 1986 Berlin discotheque bombing, the 1988 Lockerbie bombing and the 1989 UTA Flight 772 bombing — conditional upon U.S. payment of compensation for the 40 Libyans killed and 220 injured in the 1986 United States bombing of Tripoli and Benghazi. On August 14, 2008, the U.S.-Libya Comprehensive Claims Settlement Agreement was signed in Tripoli. Former British Ambassador to Libya Oliver Miles described the agreement as "a bold step, with political cost for both parties" and wrote an article in the online edition of The Guardian querying whether the agreement is likely to work.[12]

In an August 2008 BBC TV interview, Saif said that Libya had admitted responsibility (but not admitted "guilt") for the Lockerbie bombing simply to get trade sanctions removed. He further admitted that Libya was being "hypocritical" and was "playing on words", but Libya had no other choice on the matter. According to Saif, a letter admitting "responsibility" was the only way to end the economic sanctions imposed on Libya. When asked about the compensation that Libya was paying to the victims' families, he again repeated that Libya was doing so because it had no other choice. He went on to describe the families of the Lockerbie victims as "trading with the blood of their sons and daughters" and being very "greedy": "They were asking for more money and more money and more money."[13]

In November 2008, Saif made a high-profile visit to the United States where he met with US Secretary of State, Condoleezza Rice. During the meeting, Rice raised the case of Libya's jailed political dissident and democracy activist, Fathi El-Jahmi.[14]

On February 20th, 2011 at 18:00 EST, he made an extemporaneous speech on Libyan state TV. In it, he blamed the unrest in Libya on tribal factions and Islamists acting on their own agendas, drunken and drugged. He promised reforms, and said the alternative would be civil war causing no trade, no oil money, and the country taken over by foreigners.[15] He closed by saying, "We will not let Al Jazeera, Al Arabiya and BBC trick us." Many analysts disagreed with his assessment, including Oliver Miles, a former British Ambassador to Libya.[16][17]

In 2006, Saif al-Islam Muammar Gaddafi was romantically linked to the Israeli actress, Orly Weinerman.[18] In 2009, he threw a party in Montenegro for his 37th birthday. Billionaires Oleg Deripaska, Peter Munk and Prince Albert of Monaco attended the event. Some invitees flew in on private jets and stayed aboard two large yachts moored in the vicinity of "Splendid", the resort where the event was hosted. He previously hosted similar parties in St Tropez and Monaco.[19]

Retrieved from "https://saifalislamgaddafithesis.fandom.com/wiki/Saif_al-Islam_Muammar_Al-Gaddafi?oldid=3954"
Community content is available under CC-BY-SA unless otherwise noted.